Or so I’m told. And today, continuing our wedding DIY madness posts, I bring you: paper. (What, you thought I was going to think of something clever there? Nope.) One of the most time-consuming projects for our wedding was the paper suite and accompanying website. I spent many hours perfecting the bits and pieces that everyone would see before the big day. Not because I was worried about what they’d think so much as because I like doing that kind of stuff and I happen to be a bit of a perfectionist. Many of you likely know already that the two of us are quite fond of retro and period styles in fashion. We particularly enjoy the 1930s for the prevalence of gloriously low backs and the golden age of bias cuts. What you may not know is that this love expands into the rest of our lives when we look at things like furniture (reupholstery posts are really overdue) and architecture. Simply put, we like old stuff way better than new, at least as far as style is concerned. (If you want to talk about safety and function, I’ll take my electricity grounded, my surges protected, my power tools new and bright yellow, and my staple gun pneumatic, thank you very much. But that’s another story for another day.) Given that, we decided on a 1930s art deco style theme for our printed and online goods. After much hemming and hawing over fonts, countless nights tracing outlines in Illustrator, and a kinda steep learning curve for web forms, we ended up with these:

[Julia’s update] The Save-the-Date design was pretty simple – we went with an image of Chicago that imitated the movie and theatre posters that would have been prevalent in the 20’s and 30’s, in that art deco style. We decided to go with an image of the city because it was so iconic, but also because we weren’t big fans of the typical flowers and hearts that accompany most wedding announcements. That just wasn’t our style. The “One Night Only” and listing of our names as starring players was more us, because so many of our friends know us as behind-the-scenes players in the theatre industry, so listing our names as top billing, like a poster or playbill, was not only a nod to our careers, but also what it might be like to attend an event where we starred for once, instead of just running the show.

The art deco style was important to our wedding because it was the style of the wedding ring that I’d found in antique store and given to Cindy when I proposed. Once we chose that style, everything else seemed to easily inform our other paper choices. The invitation design was actually inspired by one of our friends who attended and helped with the wedding. He came to a party we were having in our home once, and saw a photo of the two of us from when we’d first met. It was taken during our first getaway together, on a weekend trip to Wisconsin, where Cindy whisked me away to a bed and breakfast. It was one of those photos that you take with one hand while facing the camera, but we had given up trying to pose and managed to capture a kiss instead. He saw that photo and said that it would be the perfect Save-the Date for our wedding. I agreed, but thought it would be a better use as our invitation image. Cindy used her Illustrator skills to trace the image in that photo, and since we were going with the art deco style, we drew some long, luxurious hair onto our heads that would do dramatic things that our short hair never could have done in that photo.

We continued the motif of the Chicago skyline on the inside of the invitations, and we decided to include it on our thank you cards, too. The thank you card image was very easy, as it was one of the many stupid-grinned photos of us from the wedding, and it pretty much said all we needed to say.

Cindy put a lot of energy and many hours of work into the website. She made it not only look gorgeous, and in the same motif as the paper items, but it was also incredibly functional for all our guests. There were links to the hotel, the restaurant, maps, and to RSVP online. She even created a form for our guests to help us build our wedding playlist, buy requesting any song they felt like listening to at the reception. My favorite feature, though, was our online gift registry. We used a website that allowed us to create a registry out of any gift that you could buy online. This was helpful to us because we didn’t want to be stuck only having things from a single store (we have eclectic tastes) and because the one store we would have chosen didn’t have a gift registry. We chose things we found all over the internet, and our guests could purchase exactly what we wanted and have them sent directly to our home, which was pretty great. We also gave our guests the option to simply give us money online, to help us pay for our Boston wedding, and to buy us Foodie Registry gift certificates, which helped launch us into our first year of eating fabulously well, and starting our very own blog about food (and obviously, other things.)

The website was designed to match our paper goods, and you can check out all the bells and whistles at this link, if you like. Here’s a screenshot/sneak peak: 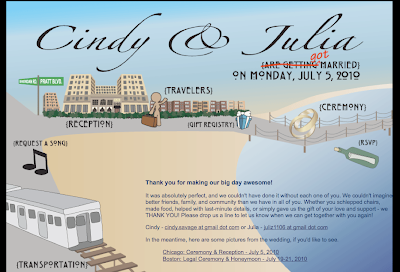 (Is it Friday yet? I feel like it should be. And that I should go to the beach… Anybody with me?)

——
Update: Julia says I’m not finished writing this post because it’s clear to everyone that I just said to hell with it and ended it without really, well, having an ending. So. Here goes.

I suppose I could tell you about how this illustration on the front of our invitations was taken from a photo we took of ourselves on our first trip together way back in the summer of 2006.

We were sooooooo in love (we still are, but not in that brand new relationship way) and we skipped town for just one night, drove way up into Wisconsin, and stayed at a lovely little B&B.; On the way up, we stopped at a lakefront park for a picnic on the beach, and on the way back we hiked through another state park that was full of waterfalls. We climbed onto a giant log in the middle of a stream and carved our initials along with a zillion other people’s…

On that trip, we were maybe six weeks into our relationship. But we were both sure enough that it would last to leave an impression in the bark. And to grow out our hair.