I mentioned the other day that I had a lot more to say on this topic, so here goes. Obviously this is my point-of-view, maybe you all are much better at self-discipline than I am, but then again, maybe not.

It seems to me that the obstacle to EVERYTHING is inertia. (Sometimes known as procrastination.) You think to yourself: I will eat better, I will exercise more, I will actually sweep and mop the floors once in a blue moon so that I’m not secretly embarrassed when we have people over. Good intentions, these.

If you follow that up with “And I will start it first thing tomorrow!” – you never will. You have to do it now, or never. If you don’t start when you have the mental energy, you will never find the physical energy. I don’t have any advice on overcoming this, really, other than to say: just start. Start with something small, because once you get going that same law of physics applies – objects in motion tend to stay in motion, and objects at rest tend to stay at rest.

For us, we started trying to eat better and the thing that helped us was signing up for fresh organic produce delivery every other week. [Chicago folks, we used Fresh Picks, and they are pretty awesome.] That forced us to eat more veggies in the first place, and also to try things we’d really never eaten before. Kale, swiss chard, parsnips, sunchokes. All delicious. Eventually, that morphed into more regular trips to the farmers’ market, eating less meat and more fish, spending more to get our animal products from farms who raise them humanely without hormones and antibiotics, and planning our meals. And as you may know, that (and our wedding) kind of led to this blog’s existence.

The same idea has, of late, helped me to get better about chores around the house. Because before, aside from laundry, half of the dishes, (wo)manning the grill, and cake/pastry making,* Julia did the bulk of the chores and I was not a very good partner in that regard. I sucked, if we’re being honest. I found I needed a system, a set schedule with deadlines to get things done. I’m using an app (Remember the Milk) on my iPhone (it can also be used via web/email), and I know it sounds lame, but when I see that stupid little red circle with the number of chores that are due, I’m motivated to do them in order to make that alert go away! To each his/her own, I suppose. My point being that it is, apparently, possible to turn into a person who does chores regularly (and consequently, a person who gets to sleep on pretty clean sheets and walk barefoot on the floor without turning her feet black) – you just need a system that works for you.

The kicker? Once everything is clean, I get annoyed much faster when it’s not and am developing an impulse to restore it to order immediately. I’m pretty sure Julia loves me more now that she doesn’t have to do everything.**

So. How do you deal with all the stupid stuff you have to get done so that you and your home are presentable?


*Yeah. I know that is not really a chore. Also, when I say laundry, I mean I put it through the washer and dryer and then bitched and moaned about how much I hate folding and putting it away, and then Julia probably folded and put it away.

**But we still need to resolve where to put dirty dishes when there is no more room in the dishwasher or it is full of clean ones. And yeah, I know that second situation is easily solved by putting the clean ones away… but you know… I’m sitting on the couch, typing this post… inertia.

Today I am super excited to share one of my favorite tips with you! You will save money and fridge space and your food will be healthier. And it will taste just as good as you imagined it

You know all those things, like chicken salad and tacos and every chip dip under the sun and chili and casseroles that require either sour cream or mayonnaise, which you don’t really want to use because they are not so good for you and/or you use either one so infrequently that it goes bad in your fridge before you use it all up? Well, here is the secret:

Whenever you are looking for that creamy tang of mayo or sour cream, just use yogurt instead. It’s really really good. And you can buy low- or no-fat if you’re watching calories, and still enjoy your favorite comfort foods. 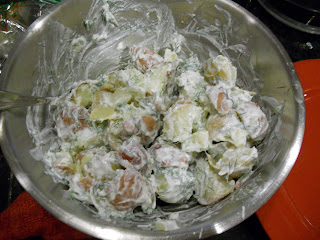 We made this potato salad using Greek yogurt and it was delicious. I’m pretty picky about my potato salad, and I really enjoyed this one. The recipe paired it with mustard-broiled salmon. I have to admit I had my doubts about that, because I am generally not a big fan of mustard. However, I love love love salmon. Do you guys love salmon as much as I do? Baked, broiled, raw in sushi… this buttery pink fish is always a welcome guest in my digestive system. I will pretty much give any recipe that contains it a try.

You guys. This was a really tasty dish, all around. The mustard paired really well with the salmon. The potato salad was yummy. The end. 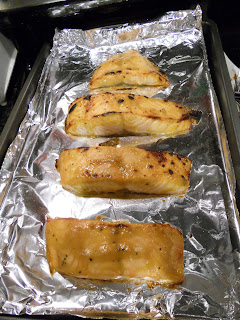 1. Adjust your top oven rack to be about 6″ away from the broiler and turn it on. (High if you have the option.)

2. Put the potatoes in a pot and cover them with cold water; bring to a boil. Add 1 teaspoon salt, reduce heat, and simmer 15-20 minutes, until tender. Drain and rinse under cold water and then cut into quarters.

3. Combine yogurt, half of the lemon juice, a teaspoon of salt and 1/4 teaspoon of pepper in a bowl. Stir in the potatoes and fennel.

4. Line a baking sheet with parchment paper or foil, and put the fillets on it. Combine the mustard and remaining lemon juice in a small bowl and spread over the salmon. Broil 6 to 8 minutes, until the fish is opaque and cooked all the way through. Garnish with the dill and serve. 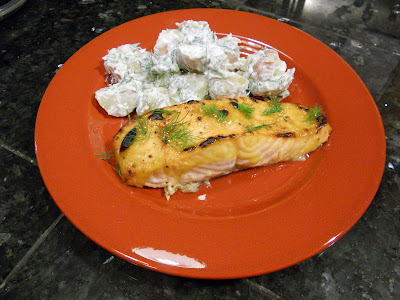 I thought it might be fun to put our weekly menus up on the blog. Maybe it will give you some ideas for your own meal planning, or maybe you’ll just pester me for pictures and then I’ll actually remember to take them. [For example, on Friday night, I made this Balsamic-glazed Lamb Meatloaf with Cannelini Bean Salad, but since we didn’t get around to dinner until 10pm, by which time we were starving, no photo was taken. And last night I made Chili-Glazed Pork with Sweet Potato Hash, but I was home alone and remembered my camera after I was halfway done eating, which is not so pretty… so I swiped these pictures from the internet, and I am happy to report that both our meals looked and tasted as good as them.]

In any case, here’s what we’re planning to eat in the near future. As I mentioned (I think?), we try to eat vegetarian at least 3 nights a week. To fill out the week, we do 2 fish meals (usually salmon and basa fillets), 1 poultry night (chicken, unless there’s a holiday), and 1 meat (lamb, pork, or beef). Rather than breaking this down by day, I’ll divide by type of meal. Recipes are linked where possible. (You’ll notice a lot of them come from Real Simple. They have great, interesting, easy recipes which include side dishes, so we look there a lot.)

Poultry/Meat
Lasagna or Tacos, depending on what I’m in the mood for
Cayenne Chicken with Avocado Salsa; Mashed Plantains with Leeks & Fresh Herbs

A little meal-planning analysis: chickpeas, leeks, tomatoes, avocados, and cilantro are all used in more than one recipe. I always try to use cilantro in more than one thing because the bunches at our grocery stores are HUGE. See my post from the other day here.

What are you cooking up this week?

TIPS TO MAKE IT EASIER:

And that’s all there is to it. Questions? Fire away.