It was TWELVE LAYERS. I’ll spare you knowledge of exactly how many pounds of butter, cups of sugar, and dozens (yes) of eggs I went through to make this sucker. (Hint: more than any other cake I can recall making, except maybe my wedding cake. Which was for many more people.)

What can I say? It was my birthday. I went overboard.*

I made a whole bunch of other food too. I know you’re interested, because you love food as much as I do (don’t you? Isn’t that why you’re here?) so here’s a round up of the party menu. I decided to keep it classy with fancy, bite-sized apps and none of the usual chip-and-dip business. Also, I attempted to maintain a balance of hot and cold things and to make sure my vegetarian/vegan/gluten-free/kosher friends all had options. Here’s what I made, in no particular order:

Of course, there was also wine a plenty along with champagne and some non-alcoholic punch, which turned out to be so good that I ended up drinking quite a bit of it.

In summary: delicious food + wine + the most excellent people = one awesome 30th birthday!

*I spent the better part of my actual birthday on Saturday prepping for this party. There were spreadsheets involved. Because, you know, I needed a schedule and a list of prep times and to make sure I had enough vegetarian, gluten-free, & kid-friendly things as well as a balance of hot & cold; sweet & savory. And also I just like spreadsheets. Yeah, I’m a major geek. But you knew that.

Boy do I feel sorry for people who don’t (or can’t) eat cake. Because I love it. And it’s come to pass that the tail end of summer and the better part of fall seems to be cake-making season for me. There are so many occasions to celebrate, and as I’m sure you know, I hardly need an excuse to bake. Let’s take a look back at last year’s sweets:

September
My birthday. Can’t remember exactly what I made, but I do remember it was the ugliest cake ever to emerge from my kitchen. Pretty sure chocolate and strawberries were involved, but it was a sloppy mess.

October
Ellen mentioned cake on facebook, so Julia told her she should come over and I’d make her one, and a few days later I did. Sadly, I no longer have any recollection of what kind of cake it was…
Green Tea Cake with Red Bean Paste filling for Alice’s birthday (which was light and delicious and really needs to be made again soon). And yes, I know her birthday is in July, but this is when we all had the same free spot in our schedules to actually get together and celebrate it.

November
Would ordinarily be a month for making Julia’s birthday cake, but last year I made pie. Apple pie with FRESH FIGS. It was the BEST. PIE. EVER. Almost made me convert to a pie-as-dessert-of-choice girl. Almost.

The cake schedule is a little lighter this year, thankfully. But Joel’s birthday came around again, as birthdays do, and so there was a Heavenly Chocolate Cake Roll (gluten-free!) with strawberries added to the whipped cream filling.

I should have probably made a cake to celebrate the arrival of our new niece, Sophia, on August 16th, but I don’t think she’s picked a favorite flavor yet…

And last night we threw a party to celebrate marriage equality in New York. [Yeah, I know we live in Chicago, but a journey of a thousand miles begins with a single step, or whatever, so eventually it’s gonna walk this way, right? Plus, we were raising money for LAMBDA LEGAL, and you can never go wrong with that. And, you know, we’re still not equal enough. And further more, we were celebrating in solidarity with a bunch of other people at other parties all around the country. So. A party was had. Cake was eaten. Champagne was consumed in copious amounts. Drunken neighbors crashed. But I digress, as always.] Ahem. 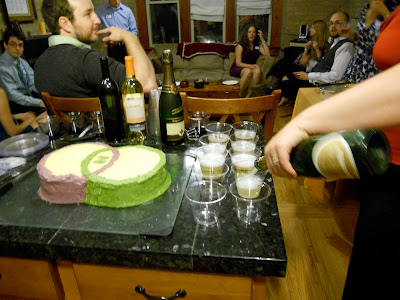 So. Naturally, I made some Marriage Equality Cake. The purple side is Devil’s Food with Mocha Whipped Cream (are you sensing a pattern here?) and the green side is Vanilla-Almond with Apricot-Almond filling. Both were quite tasty, and I’ll be eating the leftovers all week.

Which brings us back to my birthday. I’m just gonna let you drool over what I have planned:

I’ll wait while you pencil in the date on your calendar. That’s September 18th, my place, 3ish. See you there. 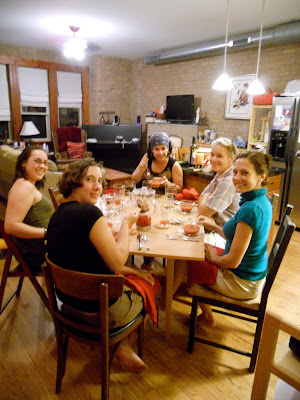 Our second fabulous dinner party was a serious group effort. Although I did the menu planning, everyone pitched in to get all the ingredients together, and then everyone just took a dish and ran with it. I tend to be somewhat controlling (ok, I’ll admit it – I’m a complete control freak!) so I was mildly apprehensive about letting people help. But, as I am discovering over and over again lately, doing things together totally rocks.

It was, in a word, AWESOME, to share my kitchen with these fabulous women.

Here’s what we made: 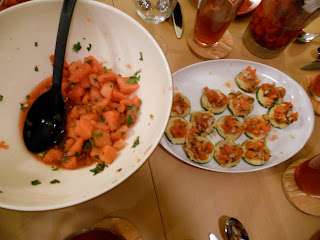 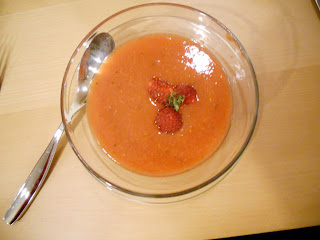 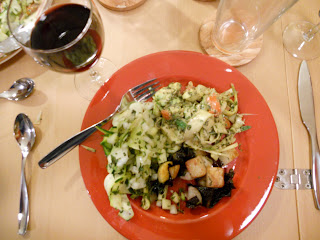 [Imagine we did not eat it so fast, and there is a picture here.]