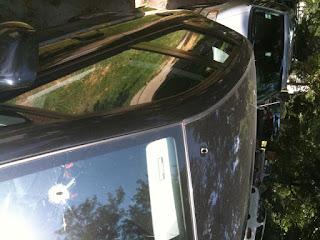 You owe me $500. Plus whatever it will cost to get my city sticker replaced. Not to mention the time I’ll spend dealing with it. And I’m pretty sure Allstate would like to be reimbursed for the tow truck, the rental car, and all the repairs. I’m guessing it isn’t going to be cheap, since you unloaded four separate bullets into my vehicle.

I have to say, it took me a minute to register what had happened. When I went out to my car for a quick post office run, I found this note attached to my drivers’ side window: 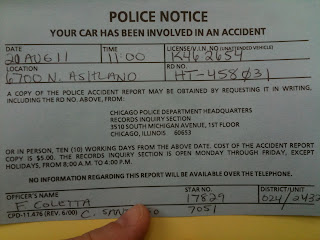 I thought, oh, must have been some kind of fender bender or something. Nice of the police to leave me a note. I walked around my car, inspecting the bumpers. They looked fine – nothing more than the usual I-park-in-the-city wear and tear. So I got into the car to make sure it still worked. As I reached to put my mail on the passenger seat, I saw it. The entire seat was covered with shards of glass. I looked up and saw these: 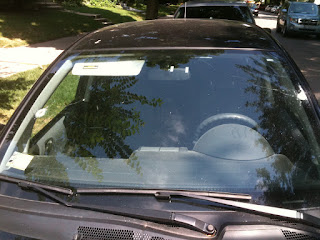 With the glare of the morning sun, I hadn’t noticed them when I briefly inspected my car. Still thinking that – as the notice indicated – it had been an accident, I wondered what kind of flying debris or tree branches had smacked my windshield in such an odd pattern. Resigning myself to having to replace my windshield later, I trekked to the post office on foot. I thought about the car the entire time.

The more I thought about it, the more I thought those holes looked like bullets. So when I got back home, I looked at the car really carefully. Walked all the way around, twice. The cops told me you ran away afterwards, so I’m willing to bet you didn’t get a good look at what you did. Lucky for you, I’ve documented your artwork for posterity’s sake. (Uh, and maybe also for evidence and insurance claims.) 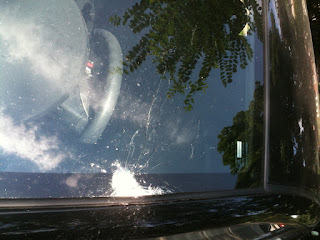 Bullet #1: Windshield, driver’s side
This was the least scary looking one. It must not have been a direct hit, because it didn’t leave an actual hole, just an impact shatter. Guess it bounced off. 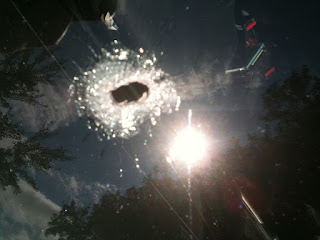 This is the one that made me think bullet hole as I was walking, and is also the cause of all the glass shards on the passenger seat.

Bullet #3: Rear door frame, passenger side. On the left, you can see the entry hole. To the right, you can see the actual bullet still lodged in the door frame, which I found when I opened the back door to start taking my stuff out of the car. I tried valiantly, but could not get the bullet out. I wanted to keep it. Or at least hold it. I know, I’m weird. 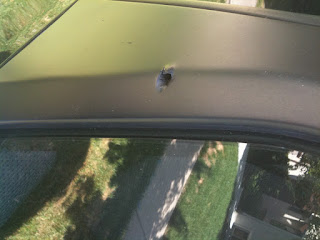 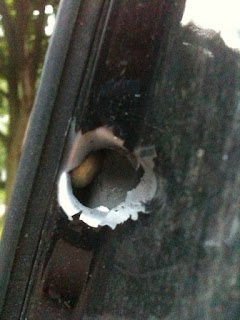 Bullet #4: Through the roof. Literally. On the left, a nice big gash in the roof. On the right, the exit wound in the interior ceiling. 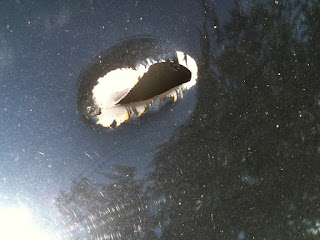 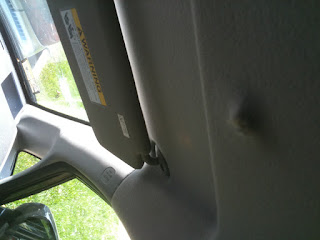 Interior Damage: At first I thought this was caused by the bullet that came in through the roof, but retrospectively I think the trajectory lines up with that big hole in the windshield. Regardless of its origin, one bullet went through the shoulder of the passenger seat (shown on the left) and into the rear seat cushion (to the right), where I am fairly certain it is still lodged. 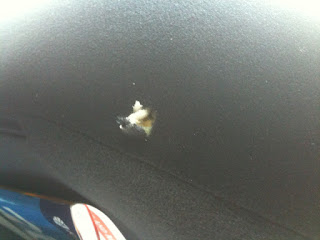 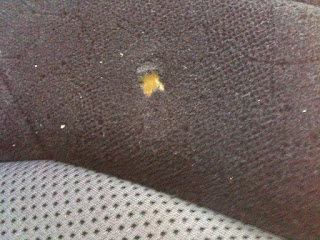 Oh, yeah, and as far as I know no one was hurt. Witnesses saw the shooters fleeing the scene. I called the police to see if they needed my car for evidence and the officer I talked to was really nice. He looked up the case for me, told me that two other cars had been shot, and that they had all the evidence they needed from the shell casings found on the scene. Allstate has been swift in dealing with the insurance claim. They hooked me up with a rental car within an hour of my phone call and got my car towed to their body shop for repairs. Minus the aforementioned $500 deductible, it’s all covered.