I don’t think I can adequately tell you in writing how much I love bread. I like just about any kind of bread, be it in loaf, bagel, biscuit, or roll form. (Um, except sourdough. I have always, always hated that.) When I was a kid, my sister and I used to make this whole wheat bread from a kids cookbook on a fairly regular basis, and the entire loaf would often be consumed before it had finished cooling. Maybe the bread love is genetic.

Anyway… I’ve been wanting to start making bread again lately (especially after that pizza last month), so I set out with a recipe for Four-hour French baguettes. That’s a measly four hours, including all the rising time. 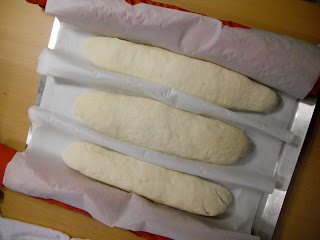 It was very simple to make. After mixing flour, salt, yeast, and water (seriously, that’s ALL the ingredients… think about that next time you read the label on your bread from the store) together, kneading, and letting it rise for a bit, I shaped it into baguettes (above) and let them rise a little longer. 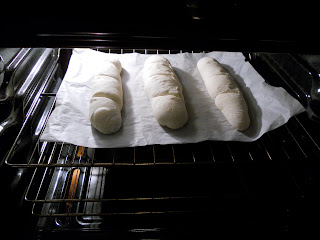 During this last rise, I preheated the oven with a baking stone for the bread, and a pan of water on the rack underneath. The water is supposed to create steam which is supposed to help make your crust nice and, well, crusty. I don’t feel like I did a great job with the first batch on the steam part. 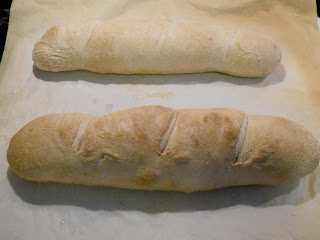 But they tasted amazing anyway. I ate a whole baguette in about 5 minutes. Granted, they were not that big, but I was hoping they’d last for at least a few days… 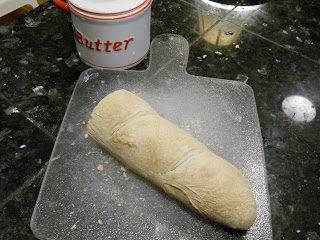 But, as I mentioned earlier, I LOVE bread. So… I had to make a second batch the same day. I decided they didn’t look as nice and golden as they do in the store, so to fix that problem I added a simple egg white wash before putting them in the oven, and then a second coat about halfway through the baking time. 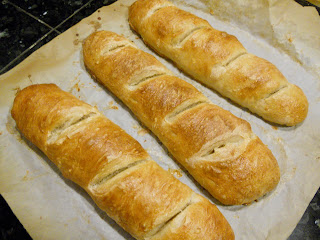 Now that looks like a bakery-worthy crust! (Though I clearly still need to work on the scoring.)

3 comments on “I want to talk about Bread.”