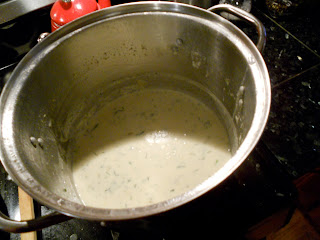 When we went on our legal wedding/honeymoon in Boston last month, one of the first things we did was stop in a restaurant that Julia remembered for its excellent, authentic New England Clam Chowder. It was the first time I ever tried it – in my entire life! – and it was delicious. Also, as good as Julia remembered it being. While we were savoring it, we discussed how we really should find a recipe and make it at home, since previous efforts to find one up to Julia’s standards in Chicago restaurants had failed miserably. So a week or two ago, I scoured the net, and pulled a couple of recipes that seemed promising, based on Julia’s knowledge of what should and should not be in clam chowder. During the grocery trip last week, I bought all the ingredients as a surprise to her.
Then, at the end of last week, I was running a low-grade fever and feeling under the weather. Historically, I’m not much of a soup eater – probably because when I was growing up, “making soup” meant microwaving a can of Campbell’s and tossing in some oyster crackers – but Julia has managed to win me over with soups that consist of fresh ingredients, and simmered in a big pot for a while – no cans or microwaves allowed. What a difference real food makes. So, we decided to give the clam chowder a try, and, um AMAZING. We could not stop eating it… except that it is pretty rich, so you get to a point where you *have* to stop, even though you really, really *want* to keep eating it. 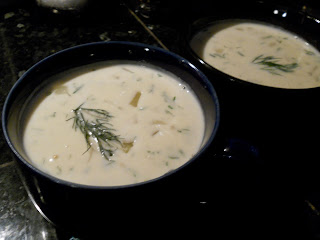 Here is the recipe, if you want to test it out on your own:
(I wish I could give credit, but it is a combo of a few recipes, an anonymous comment on a random food blog, and our addition of dill, which was specific to the restaurant in Boston, and happens to be a wonderful touch.)

Saute onion in butter. Sprinkle in flour and cook until almost light brown. Pour in juice from clams and add bay leaf; simmer until thick. Pour in milk and cream; simmer again, adding potatoes and reserved clams. Cook until potatoes are tender but still firm. Salt and pepper to taste. Stir in dill.

Makes 8-10 servings, depending on how much you can eat in one sitting!